This sponsored article is brought to you by COMSOL.

The modern internet-connected world is often described as wired, but most core network data traffic is actually carried by optical fiber — not electric wires. Despite this, existing infrastructure still relies on many electrical signal processing components embedded inside fiber optic networks. Replacing these components with photonic devices could boost network speed, capacity, and reliability. To help realize the potential of this emerging technology, a multinational team at the Swiss Federal Institute of Technology Lausanne (EPFL) has developed a prototype of a silicon photonic phase shifter, a device that could become an essential building block for the next generation of optical fiber data networks.

Lighting a Path Toward All-Optical Networks

Using photonic devices to process photonic signals seems logical, so why is this approach not already the norm? “A very good question, but actually a tricky one to answer!” says Hamed Sattari, an engineer currently at the Swiss Center for Electronics and Microtechnology (CSEM) specializing in photonic integrated circuits (PIC) with a focus on microelectromechanical system (MEMS) technology. Sattari was a key member of the EPFL photonics team that developed the silicon photonic phase shifter. In pursuing a MEMS-based approach to optical signal processing, Sattari and his colleagues are taking advantage of new and emerging fabrication technology. “Even ten years ago, we were not able to reliably produce integrated movable structures for use in these devices,” Sattari says. “Now, silicon photonics and MEMS are becoming more achievable with the current manufacturing capabilities of the microelectronics industry. Our goal is to demonstrate how these capabilities can be used to transform optical fiber network infrastructure.”

Optical fiber networks, which make up the backbone of the internet, rely on many electrical signal processing devices. Nanoscale silicon photonic network components, such as phase shifters, could boost optical network speed, capacity, and reliability.

The phase shifter design project is part of EPFL’s broader efforts to develop programmable photonic components for fiber optic data networks and space applications. These devices include switches; chip-to-fiber grating couplers; variable optical attenuators (VOAs); and phase shifters, which modulate optical signals. “Existing optical phase shifters for this application tend to be bulky, or they suffer from signal loss,” Sattari says. “Our priority is to create a smaller phase shifter with lower loss, and to make it scalable for use in many network applications. MEMS actuation of movable waveguides could modulate an optical signal with low power consumption in a small footprint,” he explains.

The MEMS phase shifter is a sophisticated mechanism with a deceptively simple-sounding purpose: It adjusts the speed of light. To shift the phase of light is to slow it down. When light is carrying a data signal, a change in its speed causes a change in the signal. Rapid and precise shifts in phase will thereby modulate the signal, supporting data transmission with minimal loss throughout the network. To change the phase of light traveling through an optical fiber conductor, or bus waveguide, the MEMS mechanism moves a piece of translucent silicon called a coupler into close proximity with the bus. 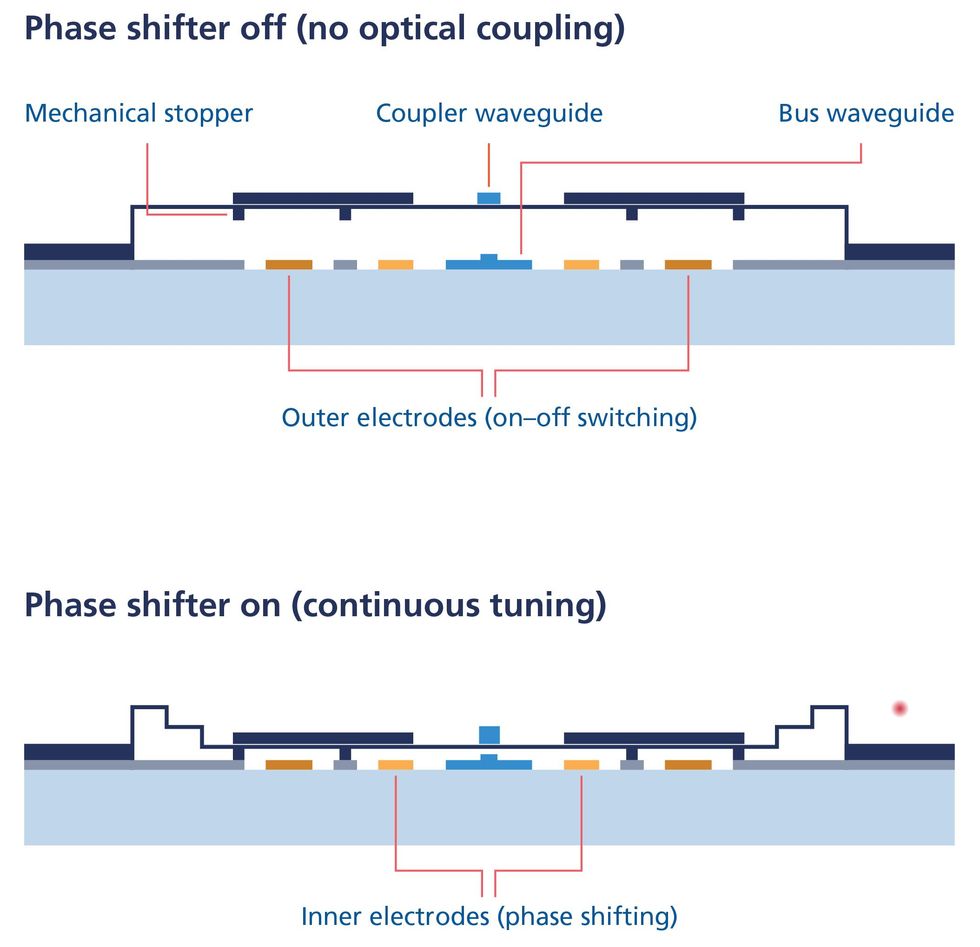 The design of the MEMS mechanism in the phase shifter provides two stages of motion (Figure 1). The first stage provides a simple on–off movement of the coupler waveguide, thereby engaging or disengaging the coupler to the bus. When the coupler is engaged, a finer range of motion is then provided by the second stage. This enables tuning of the gap between the coupler and bus, which provides precise modulation of phase change in the optical signal. “Moving the coupler toward the bus is what changes the phase of the signal,” explains Sattari. “The coupler is made from silicon with a high refractive index. When the two components are coupled, a light wave moving through the bus will also pass through the coupler, and the wave will slow down.” If the optical coupling of the coupler and bus is not carefully controlled, the light’s waveform can be distorted, potentially losing the signal — and the data.

Designing at Nanoscale with Optical and Electromechanical Simulation

The challenge for Sattari and his team was to design a nanoscale mechanism to control the coupling process as precisely and reliably as possible. As their phase shifter would use electric current to physically move an optical element, Sattari and the EPFL team took a two-track approach to the device’s design. Their goal was to determine how much voltage had to be applied to the MEMS mechanism to induce a desired shift in the photonic signal. Simulation was an essential tool for determining the multiple values that would establish the voltage versus phase relationship. “Voltage vs. phase is a complex multiphysics question. The COMSOL Multiphysics software gave us many options for breaking this large problem into smaller tasks,” Sattari says. “We conducted our simulation in two parallel arcs, using the RF Module for optical modeling and the Structural Mechanics Module for electromechanical simulation.”

The optical modeling (Figure 2) included a mode analysis, which determined the effective refractive index of the coupled waveguide elements, followed by a study of the signal propagation. “Our goal is for light to enter and exit our device with only the desired change in its phase,” Sattari says. “To help achieve this, we can determine the eigenmode of our system in COMSOL.”

Along with determining the physical forms of the waveguide and actuation mechanism, simulation also enabled Sattari to study stress effects, such as unwanted deformation or displacement caused by repeated operation. “Every decision about the design is based on what the simulation showed us,” he says.

Adding to the Foundation of Future Photonic Networks

The goal of this project was to demonstrate how MEMS phase shifters could be produced with existing fabrication capabilities. The result is a robust and reliable design that is achievable with existing surface micromachined manufacturing processes, and occupies a total footprint of just 60 μm × 44 μm. Now that they have an established proof of concept, Sattari and his colleagues look forward to seeing their designs integrated into the world’s optical data networks. “We are creating building blocks for the future, and it will be rewarding to see their potential become a reality,” says Sattari.

China Inching Closer To A Nuclear-Powered Base On The Moon